DNA, Helium Drives And Beyond: The Astounding Future of Data Storage Technologies 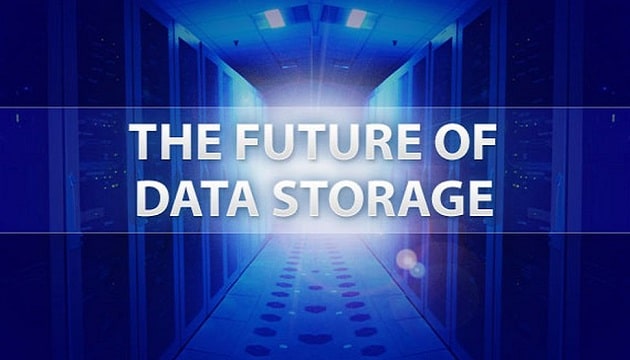 Ever since the first memory device was invented — initially bulky, limited and sluggish, — researches and inventors have been pushing the limits beyond what’s possible, improving not only the physical size of the storage media, but also its performance and capacity. When just a couple of decades ago messing around with fragile CD/DVDs and incapacious floppy disks was considered an unprecedented technology breakthrough, today we’re used to devices with schemes that are smaller than a postage stamp: just click on that “Save” button, and watch the data whisking off straight into the cloud…

Well, that’s how we barely ran out of space. With the 3.7 billion people generating nearly 2.5 quintillion bytes of information every day, data centers are scarcely able to handle with existing demand — while it only grows by 40-60% per year, as shown by the most recent Computerworld’s findings. Moreover, according to global scientific predictions, by 2025 the world will come to numbers like 160 zettabytes of data being produced per year — which is more than the number of stars in the observable universe.

Another thing to be concerned about is the environmental factor. As proven in the recent study, 7 percent of the total carbon footprint caused by technology is due to data centers. So try to wrap your mind around this one: a single data center is able to consume more power than a medium-size town, according to scientific research.

Thankfully, there are hundreds of talented scientists and dedicated inventors around the world set about seeking a better alternative and tirelessly working on the proper solutions to the situation we got into. Ahead, we’ve gathered the most mind-boggling inventions and game-changing technologies, with a brief overview of each, in order to shed some light on concepts that might be adopted worldwide in foreseeable future.

The hard drives we’re presently working with consist of rapidly spinning platters that rotate at a given speed. However, the air they’re filled with adds a fair amount of drag on those platters, due to which a fair amount of additional energy is required to rotate them.

With that in mind, researches soon hit upon the idea of replacing the air inside of a hard drive with helium. They assumed that using helium, since it’s lighter than air (as we all know from the basic school chemistry course), should significantly reduce the resistance — and thereby the required amount of energy. The most difficult part, however, was the fact helium tends to escape from everywhere; for this reason, it took years for the manufacturers to come up with a hard drive that not only could cope with refraining helium inside, but also function properly.

Eventually, it worked! Helium drives had soon gone further than just a concept: they became commercially available in November 2013 — with the first helium-filled hard disk being introduced to the general public by HGST, a Western Digital subsidiary. What is even more shocking, it took less than 4 years for this first 6TB helium-filled disk — a completely unique device at that moment — to evolve into 12, 14, and 16TB hard drives, today offering today the highest performance of all known.

On the other hand, performance is not the only obstacle we yet have to overcome. Most current storage devices must adhere to a standard form factor — either 2.5in or 3.5in — to fit in standard computer cases, which limits the physical area of hard drive platters, and thus the overall capacity. The solution to this packaging problem would be increasing data density by the thousands of times, by stuffing more bytes into the same surface area. But how challenging is that?

How do you like the idea of keeping various kinds of data within a molecule that nature invented to store biological information in? If you find it a curious, yet way too unrealistic storage technology at the same time — we agree.

Nonetheless, in 2012 Harvard researchers managed to encode DNA with digital data, namely — eleven JPEG images, an HTML book consisting of 53.400 words, and a JavaScript program in addition. The most mind-blowing thing about DNA is thus the incredible storage density it offers, which is equal to 2.2 petabytes per gram… just try to imagine: a DNA hard disk about the size of a teaspoon would be capable of fitting all of the world’s data on it.

Of course, the DNA-storage method won’t be implemented soon because of two, pretty obvious, reasons: firstly, it takes an extremely long time to read and write to DNA; secondly, the technology is yet way too expensive to be usable now: the cost to encode 83 kilobytes was about $1.500 US dollars, reported New Scientist.

Another astounding next-gen storage technology has been developed in the U.K. Researchers from the University of Manchester created molecules that one day could store hundreds of times more data than the mightiest hard disk we know today — while refraining it in a materially smaller form factor. The catch is that it needs to be kept extremely cold in order to function.

This method, if works, will lead to a very useful technology called “single-molecule magnets”. Such magnets, due to their ability to remember the direction of an applied magnetic field over relatively long periods of time, may be able to store data and be “written” — while representing sizes many times smaller than existing magnetic materials we use to store information. “Using single-molecule magnets, we could potentially make data storage media that is 100 times denser than current technologies such as HDDs and SSDs, which are facing their own limitations for data density,” explains Dr. Nicholas Chilton, a senior lecturer and Royal Society University Research Fellow in the Department of Chemistry at the University of Manchester.

Which, however, might be even more importantly, adoption of the frozen data technology might be an all-embracing solution: since data centers would require supercooling technology to use it, a significant reduction in their carbon footprint would be included. Therefore, in addition to lower operating costs and greater energy efficiency, implementation of “cold molecules” could also become a substantial measure for us to be less damaging to the environment.

Cold molecules didn’t impress you quite enough? Let me then introduce you to another revolutionary technology that is being presently elaborated by researchers of the U.K.’s University of Southampton, namely… glass. Basically, 5D storage will imply terabytes of data being carved into tiny glass discs in multiple layers — including the usual three dimensions — with femtosecond laser writing. The key of enormous capacities the technology promises is in 5D: with orientation and size of structures imprinted onto the surface of the disk, we might achieve five degrees of freedom for the data to be stored.

Okay, small pieces of glass are not what going to overwhelm you… But the longevity of such storages surely will: compared to the vulnerable magnetic tapes, that typically last no longer than a decade, 5D optical storage devices have thermal stability up to 1.800 degrees Fahrenheit, in fact meaning odds-on in the severe rivalry of all existing data storage methods. Given all of the above, another question arises: What will the future of cloud platforms look like?

…but that is completely another story.

All of these technologies will have to solve plenty of bottleneck issues before they are seen in our daily life. For what it’s worth, until the infinite machines are created, we must be content with the progress of today — including operational systems that sporadically greet us with Blue Screens of Death, and hard drives that every now and then trying to go belly up.

So, in case some imperfect device of today has let you down and lost any of the important information it stored — make sure to contact Salvagedata, so our team of dedicated, highly-qualified technicians could get your vital data back in the shortest terms possible!