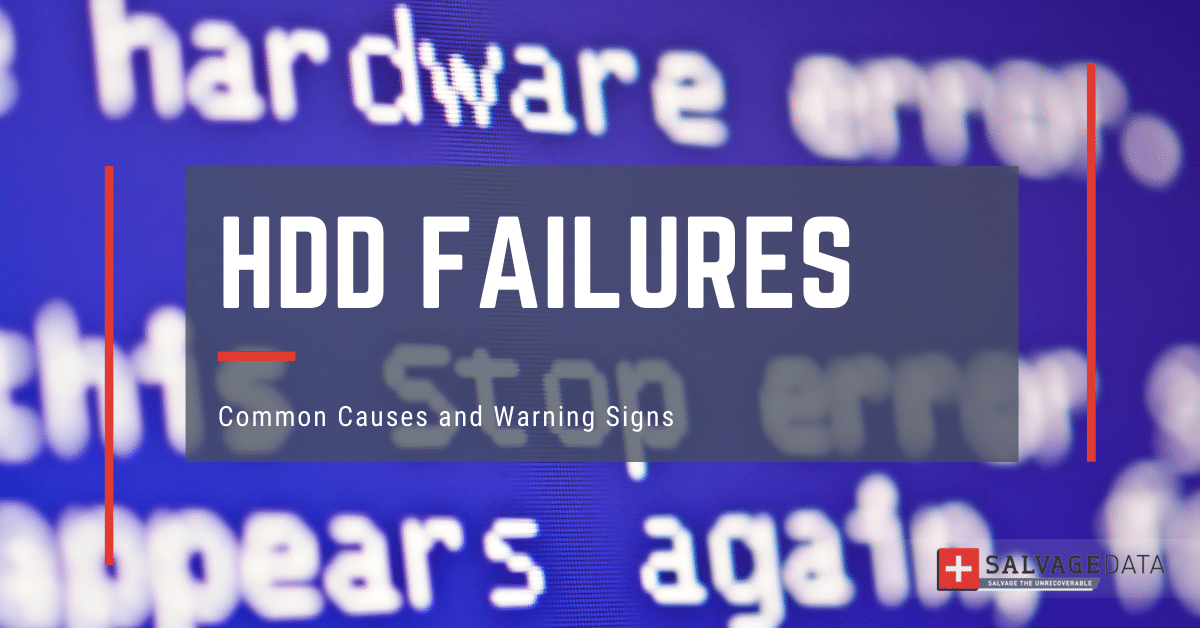 Whether you were already suspecting a hard drive failure or got caught without notice with a sudden crash, you probably came to this article looking for answers or at least for clues.

Unless you are very diligent about your computer and are searching online for how to prevent a hard drive failure, chances are, it already happened or about to.

Right away, your main concern is what causes hard drive failure and how to fix it.

First, if you haven’t already, be sure to back up your data and any important files while you can.

Then, let’s go over the common causes of hard drive failure and how to identify any warning signs.

How to Tell If Your Hard Drive is Failing

Our devices are in charge of storing vast amounts of precious, priceless, and crucial information. Needless to say, encountering failures and all the subsequent data losses can be extremely frustrating.

The average hard disk drive has a lifespan between 3 and 5 years before complete failure.

While statistics state that 90% of hard drives run past the three-year mark, annually thousands of companies suffer financial losses due to the downtimes caused by hard drive failures.

A wide variety of causes can shorten the lifespan of your hard drive.

For instance, if you just dropped your HDD, then the cause for a hard drive failure it’s pretty obvious. However, some hard disk drive malfunction might require some further investigation.

First of all, here are common pointers – fatal or gradual – that must not be neglected:

In case your computer is experiencing any of the above hard drive failure symptoms, the best would be to turn the device off.

Especially with unusual noises, which signal a mechanical failure, insisting on making it work might worsen the damage.

While being quite reliable, a hard drive failure can be caused even by the smallest fault.

Physical contact or damage, heat, humidity, dust, power surges, or even time can cause hard drive failure (not to mention frequent user errors).

Since they differ in approach to solving, it is important to be able to recognize which one you’re dealing with — so that you can recover your data safely after a fault.

Hard drives represent complex devices that include numerous moving components. As soon as any of those important parts get damaged due to shock or control errors, the hard disk begins to malfunction, and failures occur.

Power surges can fry the electrical components in a computer. If one of the boards gets damaged due to power spikes, you lose access to your data. Symptoms: a. drive is powered, yet doesn’t show any signs of function; b. you can hear disk knocking or clicking sounds (both mean the motor fails to spin).

A malfunctioning fan or blocked vent could overheat your CPU. Symptoms: a. fans don’t move, or move too slow; b. desktop/laptop gets heated soon after starting; c. clicking sounds.

Damaging in the forms of spills, natural disasters, and humidity.

Please note that if your hard drive failure was caused by a natural disaster, SalvageData offers a free emergency evaluation and a special price for data recovery.

Dropping a hard drive, as well as vibration over time, can cause various parts to stop working.

Not a common cause of a hard drive failure, but for sure a burned disk is the hardest recovery. If the fire alone didn’t damage the casing enough, most likely the heat generated will demagnetize the platter. Not to mention water damage as a result of firefighting.

It can be the easiest or the most difficult recovery job depending on the circumstances that logical failure was caused by.

Malware, spyware, ransomware, and other viruses can hold your files hostage.

Editing settings of the operating system registry or improper uninstallation of applications can affect a hard drive reboot.

How to Fix a Hard Drive Failure?

No need to panic. There are effective ways to troubleshoot faulty hard drives and recover lost data from damaged disks.

Start by cleaning out any computer vent from debris and dust. A clogged vent might be causing your failing hard drive to overheat.

Next, check all power and data cables for proper connection. If these are plugged in correctly and yet no sign of activity, try replacing the power cable.

In case your device is able to boot, you can run a BIOS or a S.M.A.R.T. check to identify the issue.

Please do NOT try and fix it yourself unless you truly are confident in the problem and solution.

Also, DO NOT attempt to open a failed hard drive.  You can cause the needle head to scratch the platter or a speck of dust can block its mechanism.

Hard Drive Failure Rate: How Long Do They Last?

Hard drives will eventually “die” over time. Which doesn’t mean to spare it either, since idle hard drives also might fail for lack of read/write movement.

Due to manufacturer defects, some hard disk drives will have higher failure rates early on, known as “infant mortality” failure.

If a hard drive does not malfunction early in its life, it will likely last for years with normal use.

As drives age, their mechanical parts naturally begin to wear and tear, leading to an increase in failures after the third year.

Unfortunately, there is no real way to prevent a hard drive failure, so you can never be too safe when working with your data.

Finally, since there are a million reasons not to mess with it and lose your data, all you have to do is watch for obvious signs of a failing hard drive. And if you think your hard drive needs attention, don’t hesitate to contact us now!