Home » Blog Page » What is & How Does A Flash Drive Work?

What is & How Does A Flash Drive Work?

If you’re like most computer users, you probably have a few USB flash drives lying around. But, have you ever wondered “how does a flash drive work?” Here we present a complete guide to the inner workings of a USB flash drive and how it stores data.

Flash drives remain an incredibly common technology to store files, despite the relatively small storage capacities they offer and how fragile storage devices they are, for example, your flash drive can get water damaged or be physically broken. You can end up choosing it for several of its benefits, such as its price, or because it’s removable, rewritable, and easy to use.

USB drives are still a great solution to transfer important data between devices and carry your data in the wallet wherever you go.

Top Summary: A better understanding of inner processes may help you care better about the device where you save your crucial data from severe loss. Knowing how a flash drive works can also prevent data loss because of common USB drive failures and help you restore lost or deleted files on your own.

What is a flash drive?

USB flash drives are small external data storage devices ‌, with no moving parts (unlike hard drives). You can plug into your laptop, desktop, and even into some tablet computers, using a USB port, USB Type-A or USB-C plug, or a USB adapter.

They’re lightweight and small, and you can attach them to keychains or carry them in your wallet.

A USB flash drive is a type of data storage device that uses flash memory to store and retrieve data.

Flash memory is an electrically erasable programmable read-only (EEPROM) format that can store and retrieve data.

Flash memory chips are non-volatile, which means they do not need a battery backup to keep data.

Also known as USB memory sticks or thumb drives, USB flash drives are small, portable, and easy to use. Most flash drives are plug-and-play, meaning they do not require any software or drivers to be installed to work.

The USB connector is used to connect the flash drive to a computer or other device.

The flash memory chip stores the data that is being transferred. 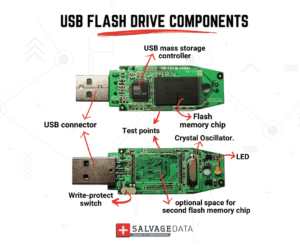 How does a flash drive work?

Flash drives operate similarly to conventional hard drives. Data is stored on the drive in the form of files and folders. When you want to access a particular file, you simply navigate to it and open it. It then transfers the data from the flash drive to your computer’s memory, where you can edit and manage the file. When you’re finished using the data, the flash memory technology saves it back onto the flash drive.

There are two types of computer memory: volatile and non-volatile.

Volatile memory is temporary. It only works with a power source turned on. For example, RAM (short for Random Access Memory) “remembers” the data using an electrical pattern, but as soon as the power goes off, it erases, or “forgets”, everything it had stored.

Non-volatile memory implies that data written on the chip won’t disappear if there is no power supply. Non-volatile memory, since transistor-based, doesn’t require any moving parts, so all the information placed on the NAND chip will remain semi-permanently (i.e. until it’s deleted or formatted). And this is the memory type USB flash drives work with.

USB flash drives can store the data even when is not connected to a power source. Flash memory chips are designed to keep information despite power sources being off or on. Flash memory allows you to erase, change, or refresh the stored data as often as needed.

How does a flash drive work on lightweight operating systems?

On lightweight operating systems, flash drives are used for booting purposes. With an operating system on your memory stick, you can easily turn personal computers into networking devices.

Along with that, thumb drives have one more advantage over optical media and floppy disks, namely their low failure rates and low-power consumption, which make them suitable for networking.

Finally, flash drives have a larger memory capacity and are smaller, meaning they are offering data storage that is more portable and convenient compared to other devices.

How do flash drives work on personal computers?

These days most computers come equipped with USB ports that can detect inserted USB drives, and‌ automatically install the missing drivers to make the data retrievable.

As to the technical side, a USB drive has plenty of other elements that make it operational.

It has a printed circuit board (PCB) that is covered in a durable casing made of rubber or plastic. Also, flash drives mostly come equipped with a type-A USB connection, which makes them compatible with standard receptacles.

Thumb drives are associated with a USB mass storage device classification, meaning they don’t require additional drivers to operate properly. Simply put, your computer’s operating system recognizes a block-structured logical unit, so that it could work with any file system, or block addressing system to read the information on the flash drive.

A flash drive enters emulation mode or acts as a hard drive once it has been connected to the USB port. This makes it easier to transfer data between the flash drive and the computer.

Important: Always safely eject your USB drive before disconnecting it from your computer. Unexpected disconnection from the system may cause an error and result in damage to the stored data.

The operating system prompts the user when it is safe to eject the flash drive from the USB port.

What are the benefits of using a flash drive?

There are many benefits of using flash drives as opposed to other forms of data storage, such as hard drives or optical discs.

One of the biggest USB drive benefits is portability. Flash drives are small and lightweight, making them easy to take with you wherever you go.

They also don’t require any special software or drivers to be installed, making them very easy to use.

Another benefit of flash drives is that they are non-volatile, which means they do not need a power source to retain data. This is in contrast to some other forms of data storage, such as hard disk drives (HDDs), which require a power source to function.

Lastly, flash drives are typically much less expensive than HDDs and other forms of data storage. This makes them an attractive option for budget-conscious consumers.

Why do you have to eject a USB drive?

One common question that people have about flash drives is, “Why do I have to eject a USB?”

When you eject a USB drive, you are essentially telling your computer to finish any pending read or write operations and then safely disconnect the drive. This is important because if you simply unplugged the drive without first ejecting it, you could corrupt the data on the drive.

To eject a USB drive, simply click on the icon for the drive in your computer’s file explorer and then select “Eject.” Once the process is complete, you can unplug the drive from your computer.

Can I leave my USB flash drive connected to the computer?

Yes, you can leave your USB flash drive connected to the computer. However, it is always a good idea to eject the drive before shutting the computer down. This will help prevent any data corruption that could occur if you simply leave the drive connected while powering on and down your PC.

What are USB drives used for?

You can use flash drives for several needs and goals:

TL; DR: Flash drives are a convenient and easy way to store and transfer data. They are small, portable, and require no power source to keep data. USB flash drives work with flash memory technology, and they are non-volatile. Meaning your data is safe on it even when it’s not connected to a power source.

SalvageData has extensive experience with flash drive data recovery. Contact our experts 24/7 for help with your USB drive.