RAID 0 vs RAID 1: Which is Better for Storage? 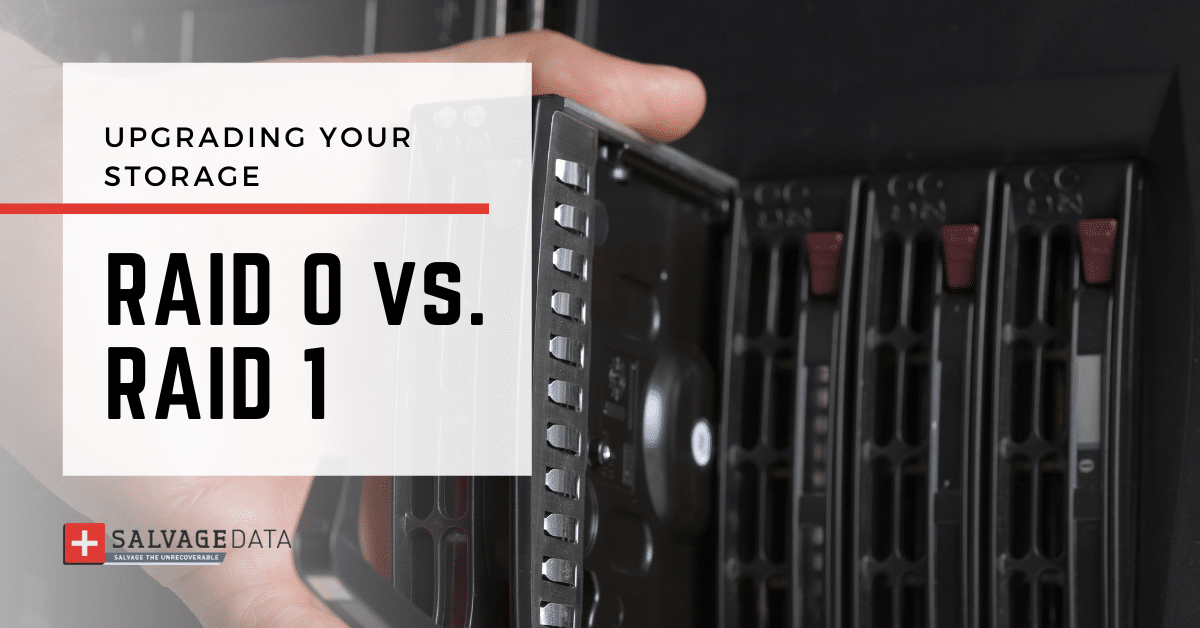 Whether for increased performance or reliability, upgrading a single disk to a RAID array of at least two disks will for sure make a big difference.

But which RAID level is better for your data storage when you compare RAID 0 vs. RAID 1?

There are a few common RAID configurations, and some unusual ones, each using different data storage distribution techniques.

However, most of the time, the first two levels, RAID 0 or RAID 1 will be enough for personal needs.

What is RAID Redundancy and How it is Achieved?

This enables an improvement in and reliability through redundancy, which means that there are a total of more than one copy of the data stored.

The versatility of the RAID array can go beyond different configurations and data distribution techniques. You can also determine the best file storage system to leverage your RAID array to its full potential, like DAS, NAS, or SAN.

RAID 0 is a type of disk array that uses striping to combine multiple disks together.

Disk striping is the process of writing individual sections of data on different disks.

Data is distributed equally across all disks that are part of the array, with no regard to where it came from or where it needs to go.

If you have 2 or more disks available for your computer, then you can create a stripe set by using the disks as one big drive letter.

With this method, data can be written to both physical drives simultaneously which provides good speed for reading and writing files to the volume.

Because the information will be distributed over multiple drives, this decreases the potential for loss of data if a single disk goes down. This also speeds up access time since more than one drive spin at the same time to get one request.

However, there’s no fault tolerance with this setup and if either disk fails then all data will be lost – hence why this configuration isn’t recommended for mission-critical tasks. RAID 0 data recovery is considered one of the most challenging in the market and should only be attempted by professionals.

RAID 1 is a type of disk array that uses mirroring to combine multiple disks together.

In the case of RAID 1 technology, two or more identical hard disk drives are configured by grouping them simultaneously with configuration information known as mirroring.

Although both disks may contain the same information, they can be accessed independently for reading and writing purposes.

You can set up two or more disks as an exact duplicate. If one disk fails then the other will immediately take over and you’ll never know any different until your failed disk has been replaced.

In order to implement RAID 1, you need 2 disks that don’t have to be exactly the same size. But keep in mind that both disks must contain equal amounts of available space.

If either disk runs out of available space then it’s not possible to use RAID 1 anymore.

As stated above, there are pros and cons for both setups and if you’re using mission-critical data then RAID 1 is recommended.

However, most people choose to use RAID 0 because it is much faster than RAID 1.

Besides, when one disk fails then the computer will continue to work without any downtime or errors. This makes RAID 0 a very popular choice in today’s modern world.

RAID 0 is made up of striping but does not have any duplication or parity disks as RAID 1 has.

In other words, if two disks fail in a RAID 0 set-up, all information on those disks will be lost. This is because the only way to read data from it is if you have all of the pieces together at once.

On the other hand, RAID 1 uses half of the disks for storing mirror copies of the data, and the other half is used for parity calculation.

This allows one to see all of the data at both read and write times. In practice, it does not offer better performance than a single drive but increases your risk of complete loss due to multiple drive failure.

If your data storage needs require the performance speed provided by RAID 0 and still need the reliability achieved with RAID 1, then you can get the best of both worlds.

RAID 10, also known as RAID 1+0, is an example where striping is combined with mirroring. It uses two sets of disks in a RAID 1 configuration plus a set in a RAID 0 configuration, to get maximum security and speed.

This would offer you high-speed reading and writing operations while giving you the security of two mirrored sets to backup your information.

This setup can actually withstand one drive failure in each mirrored pair of disk drives which means RAID 10 data recovery is highly likely when done by experts.

Choosing which RAID level, RAID 0 or RAID 1, suits you best will depend on your data storage needs. Overall, consider these RAID advantages and disadvantages in your decision-making process:

The speed at which data is transferred to and from storage devices increases because multiple drives are used simultaneously. For example, if eight SATA drives were configured in a RAID 0 array, then up to seven times faster read/write access could be obtained compared with one single drive. This is important for processing large files such as video, audio, or images where fast transfer rates are required.

The ability for multiple disks to fail without losing any stored data makes RAID systems more reliable than traditional hard disk drives. With redundancy absent in normal hard disks, if one drive fails another has to be purchased and data restored from backups. RAID systems protect users against drive failures by containing multiple copies of the same information across different disks.

Adopting a RAID system for your business does not come cheap as it involves setting up several hard disk drives into one single unit. Unfortunately, despite all efforts to provide resilient storage, there is still at least a 50% chance of complete hardware failure due to multiple disk crashes. Consequently, you should always keep proper backups of your data in case the worst comes to the worst!

In conclusion, as larger volumes of data are been processed, then a RAID array would be a smart approach to keep it safely stored. Either RAID 0 or RAID 1 would already mean an upgrade from a single unit.

However, rest assured that even if one or more disks from a RAID array fail, data recoverability is very high. SalvageData experts are on stand-by to help overcome any RAID failure!