Home / Blog Page / What is RAID Storage and What is the Best RAID Configuration?

What is RAID Storage and What is the Best RAID Configuration? 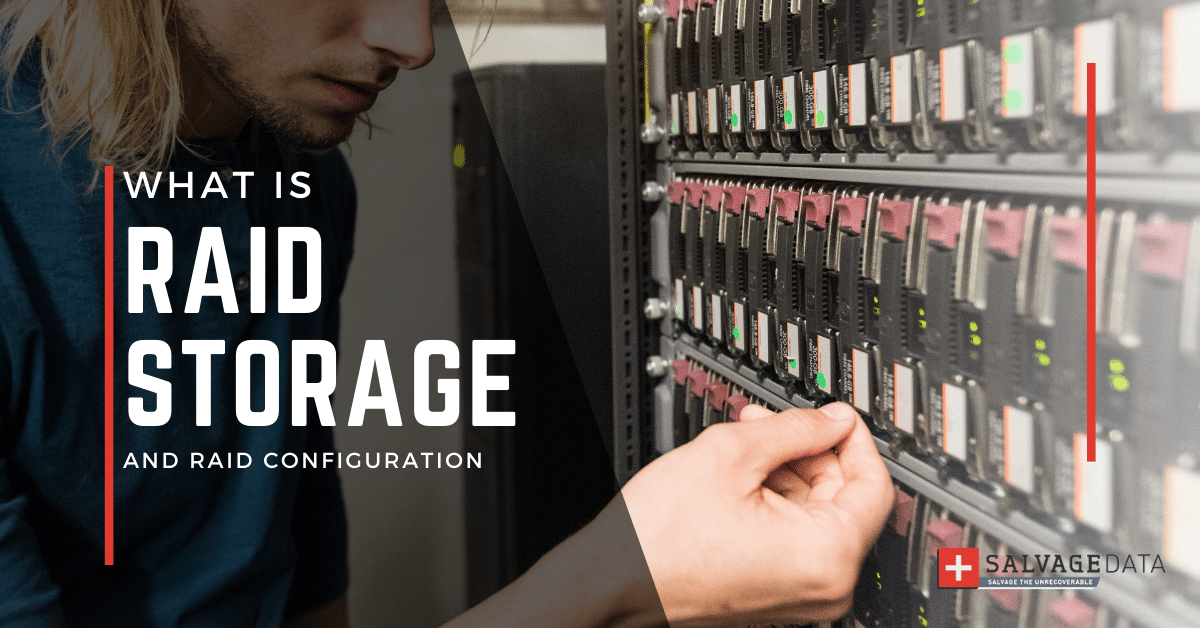 There comes a time when you run out of space and your computer will work frustratingly slow.

That’s when you need a RAID solution that offers redundancy, which is when you go from a single disk to multiple ones.

However, the best suiting RAID configuration depends on your data storage needs – and budget.

There are five main RAID levels (and a few other RAID types not as common). Depending on the volume, we’ll tell you why you might want to use a RAID 0 disk configuration.

Let’s get those RAID levels explained so you can make the best decision for the volume you need to be handled by a RAID array.

RAID is a technology used to increase the performance and reliability of data storage by combining multiple smaller disks into a single, more capable, device.

The term itself was coined by David Patterson, Garth Gibson, and Randy Katz. RAID was first mentioned in 1988 in their technical report named “A Case for Redundant Arrays of Inexpensive Disks (RAID)”.

In this report, it was argued that an array in RAID redundancy, could be more reliable than any single disk drive.

According to Katz, the term inexpensive in the acronym was soon replaced with independent by industry vendors due to the implications of low costs.

RAID arrays grant numerous advantages, and they vary depending on the chosen RAID configuration.

In general, RAID helps with:

What is RAID Used For

RAID improves performance by placing data on multiple disks and thereby allowing input/output operations to overlap in a balanced way. 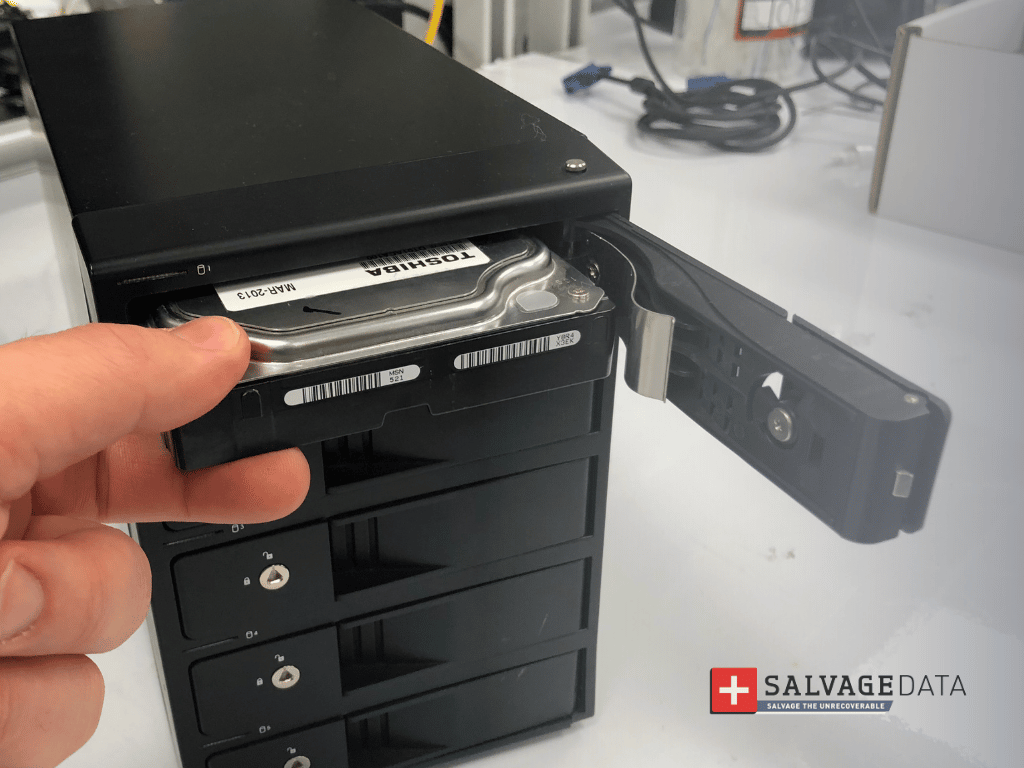 On the other hand, as the use of multiple disks increases the mean time between failures (MTBF), setting up a RAID array also remarkably enhances fault tolerance.

Although RAID can be used to back up data from other disks (or arrays) for the purpose of increasing the performance and reliability of the storage, it is NOT meant to be an alternative or substitute for backing up data.

Data still might get damaged or erased without harm to the disk it’s stored on.

For instance, part of the data may be overwritten as a result of a system malfunction, or the file can become damaged due to an unintentional (or malice) user action.

It’s important to understand the hard drive failure signs so you can determine if you need RAID data recovery.

How RAID Redundancy is Achieved

There are various RAID configurations (or RAID levels) each of which applies different techniques to operate the stored data.

The distribution of data among available disks can be managed either by software or hardware, known as RAID Controller.

The main RAID techniques for data storage are:

Each technique suits a purpose and provides a different benefit. Depending on the RAID configuration (RAID 0, RAID 1, RAID 5, RAID 6, or RAID 10), you can use one alone or combine more than one technique.

Below are the most popular RAID levels and how each data distribution technique is applied (or combinations of them) to suit different needs. 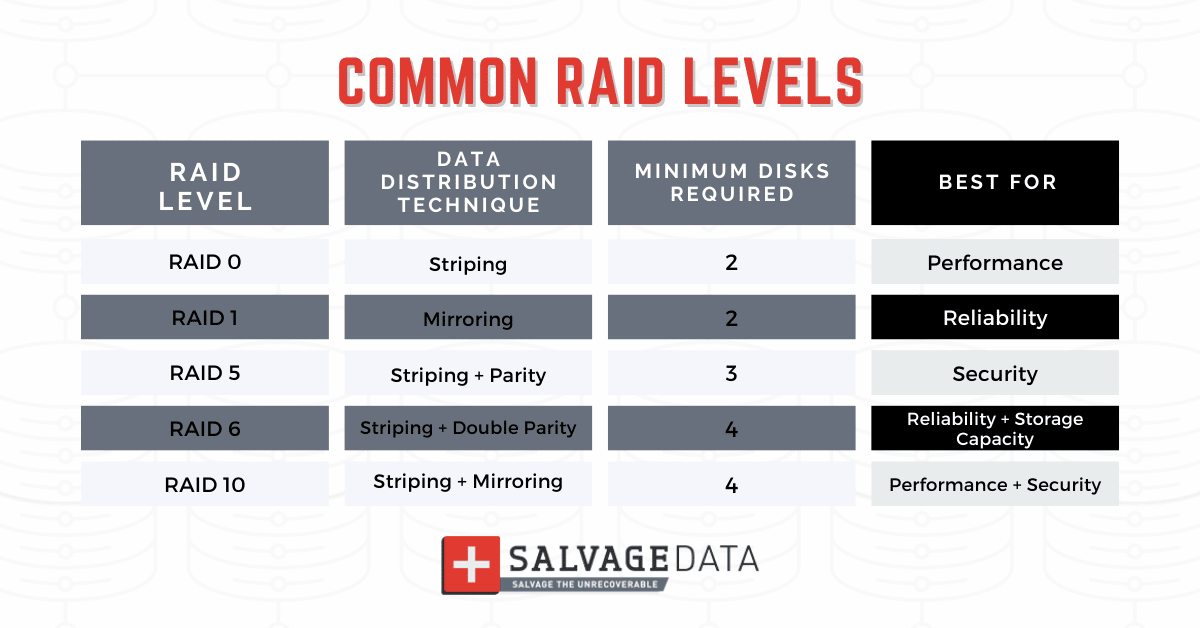 If one of the drives fails, all data in the RAID 0 array is lost and the whole system is unable to function.

Best used for non-critical data storing purposes such as caching live streams. When speed is important and reliability is secondary, this is why you might want to use a RAID 0 Configuration.

Cons: No redundancy of data; no fault tolerance.

Applies mirroring technique. In comparison with the previous level, RAID 0 vs RAID 1, the latter duplicates data by writing identical information to pairs of drives.

This method doesn’t offer increased write speed, yet is a great way to create failover storage. If any of the elements in the array fails, the system can still access data from the remaining disks.

As soon as the faulty disk is replaced with a new one, the data is copied to it from the functioning disk(s) to rebuild the array.

Best used for application servers where data redundancy and reliability are crucial.

Cons: Lower usable storage capacity (only half of the total drive volume since all data is written twice).

Applies striping with parity technique. RAID 5 is currently the most common and widely accepted as one of the most secure configurations.

RAID 5 requires at least three drives. However, it offers both speed (as data is accessed from multiple disks) and great reliability, since it is capable of calculating the data from one of the other data blocks, should they no longer be available.

Therefore, this RAID level can withstand a single drive failure without losing data or access to it.

Best used for file and application servers that have a limited number of data drives.

Pros: Fault tolerance and increased performance of read operations (writing is somewhat slower due to the calculation processes).

It is nearly identical in setup to RAID 5, however, RAID 6 provides increased reliability by utilizing one more parity block. This allows the whole array to withstand two drives dying simultaneously and have an operational system to remain accessible.

Applies striping and mirroring techniques. This level combines the redundancy of RAID 1 with the increased performance of RAID 0.

It provides security by mirroring all data on secondary drives while using striping across each set of drives to speed up data transfers.

RAID 10 is best suitable for environments where both high performance and security are required.

Cons: Much higher cost (since half of the storage capacity is involved in mirroring).

Suitable for: Highly used database servers and those performing a lot of write operations.

Rarely used, this method strips data at the bit rather than block-level and uses a Hamming code for error correction.

This configuration consists of block-level striping and a dedicated parity disk. It allows the system quick read speed, but generally, slower write speed.

This is a layout variation of RAID 5 in which a designated spare space allows rebuilding a failed array right away. This space is always left empty in the case of a failure.

Learning more about what’s a RAID Storage System and its benefits is the first step towards upgrading your solo HDD setup to a RAID array.

This RAID configuration guide should help you to navigate among possible options and determine what type of RAID suits your needs the best.

Learn more about RAID or request support from SalvageData experts.