HDD RAID vs SSD RAID: Which Is Better? 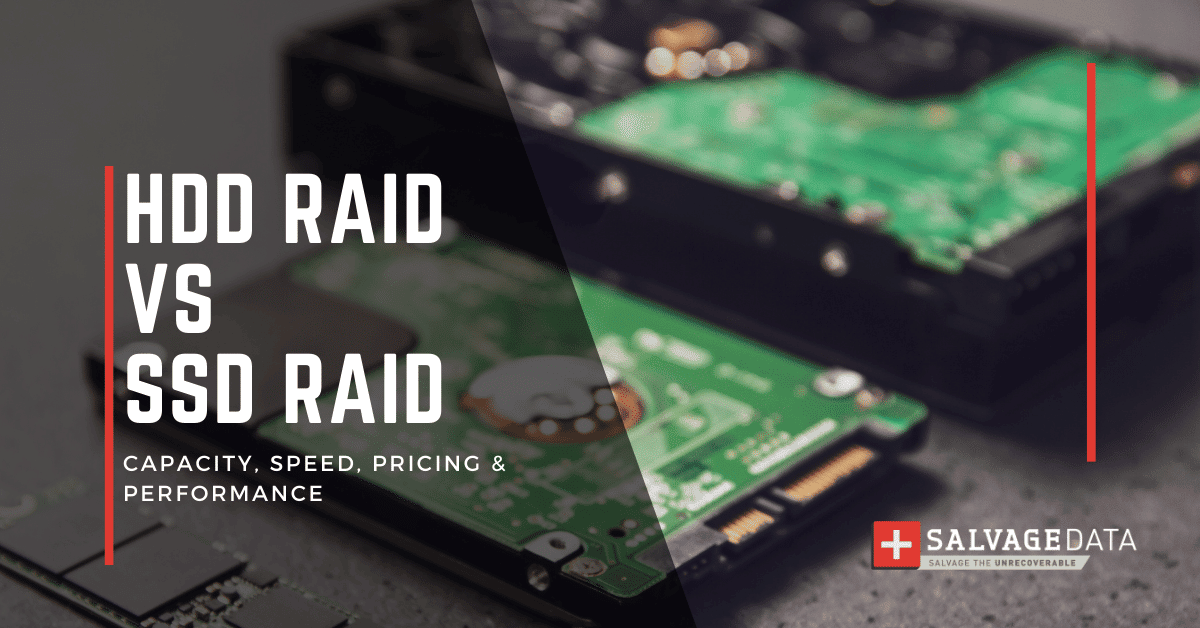 In data storage, RAID (Redundant Array of Independent Disks) is one of the most popular methods around. Enterprises trust their data to this technology, especially small and medium-sized companies. It combines multiple disks into one, allowing for improved performance and reliability. But with SSDs quickly taking over from mechanical hard drives, entrepreneurs are facing a new choice: HDD RAID Vs SSD RAID.

Which is better: HDD RAID or SSD RAID?

There’s no easy answer here, as there are benefits and drawbacks to both options. Hard drive RAID is typically cheaper and offers more storage capacity, while SSD RAID is faster and more reliable. Ultimately, the best option for you will depend on your specific needs and budget.

If you’re trying to decide between HDD RAID and SSD RAID, here are a few things to keep in mind.

Capacity. Hard drives can hold more data than an SSD of the same price point.

Speed. An HDD RAID array will be slower than an SSD RAID of the same size.

Performance. Both SSD and hard drives are similar when comparing their performance on RAID. Here, software RAID vs hardware RAID actually impacts.

How to decide between HDD RAID vs SSD RAID

Deciding between hard drive RAID and SSD RAID depends on your needs and purposes. No matter which option you choose, setting up a RAID array can be a great way to improve your data storage situation.

So, if you need your RAID to have fast read/write speeds, your best option would have an SSD RAID. But, if storage space is more important, the HDD RAID is the perfect solution for you.

Therefore, define your goal and do the math, since your budget will help with this decision. Only then you can see all the pros and cons of each RAID disk and decide to build it with SSD or HDD.

Benefits of SSD for RAID

Increased speed. When you use an SSD for the RAID array, you guarantee that the read/write speed grows. This means that you can perform more tasks simultaneously and access files faster.

More reliable. Unlike HDDs, SSDs don’t have moving parts, making them more reliable drives since they have reduced chances of mechanical issues.

Drawbacks of SSD for RAID

More expensive. SSD is a relatively new technology. It’s faster and more reliable when compared with hard drives. However, they cost more. SSDs can cost up to double an HDD with the same storage capacity.

It’s difficult to recover data. SSDs are more complex data storage technology, making it more difficult to restore data. If you have multiple disk failures on your array, it’ll cost more and take more time to recover your files when compared to an HDD. 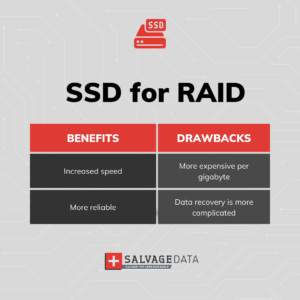 Benefits of Hard Drive for RAID

Cheaper per gigabyte. Hard drives have a lower price per gigabyte storage capacity than SSDs. It makes the technology more affordable, especially for RAID that needs multiple disks.

Great for mass storage. Due to its large available storage capacity, businesses that need to save large files can rely on hard drives for their data storage needs.

Drawbacks of hard drive for RAID

Slower speed. Hard drives have moving parts and, unlike SSDs, they don’t use flash memory. This makes a regular HDD much slower to save and access data when compared with SSDs.

Higher chance of failure rates. Because of its build of moving platters and arms that read and write data, hard drives are more susceptible to mechanical failures. In a RAID array, it means you may need to replace disks faster than if you’re using SSDs.

Need more physical space. Hard drives are physically bigger than SSDs, therefore, you need devices with slots that fit them and enough protected space to store them as well. 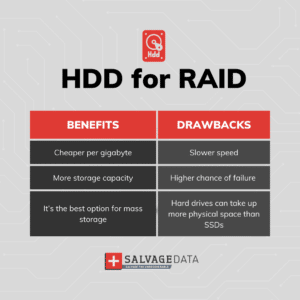 If you want the increased speed of an SSD but don’t want to sacrifice storage capacity or reliability, you can always combine SSD and HDD in a RAID array. This way, you can get the best of both technologies. However, it’s not always the best option.

Benefits of combining SSD and Hard Drive for RAID

Increased speed. Using both technologies on your array, you may add the speed from the SSD to your RAID.

More expensive. Since that you must follow the disk with more storage capacity to guarantee the disk space on your array, you’ll have to invest more in SSDs with the same capacity as your HDDs.

Don’t use all available storage capacity. It’s harder to get the most of HDD space as the SSD disk may prevent it to use the total disk space. Even if you invest in large-capacity SSDs for your array, hard drives are likely to still have more storage capacity.

SSDs usually are more reliable drives, have a longer lifespan, and are less susceptible to physical damage. Unfortunately, they can have errors and data loss as well.

When dealing with RAID you should never try to restore lost files on your own.