Home » Blog Page » RAID with SSD and HDD: Everything you need to know

RAID with SSD and HDD: Everything you need to know 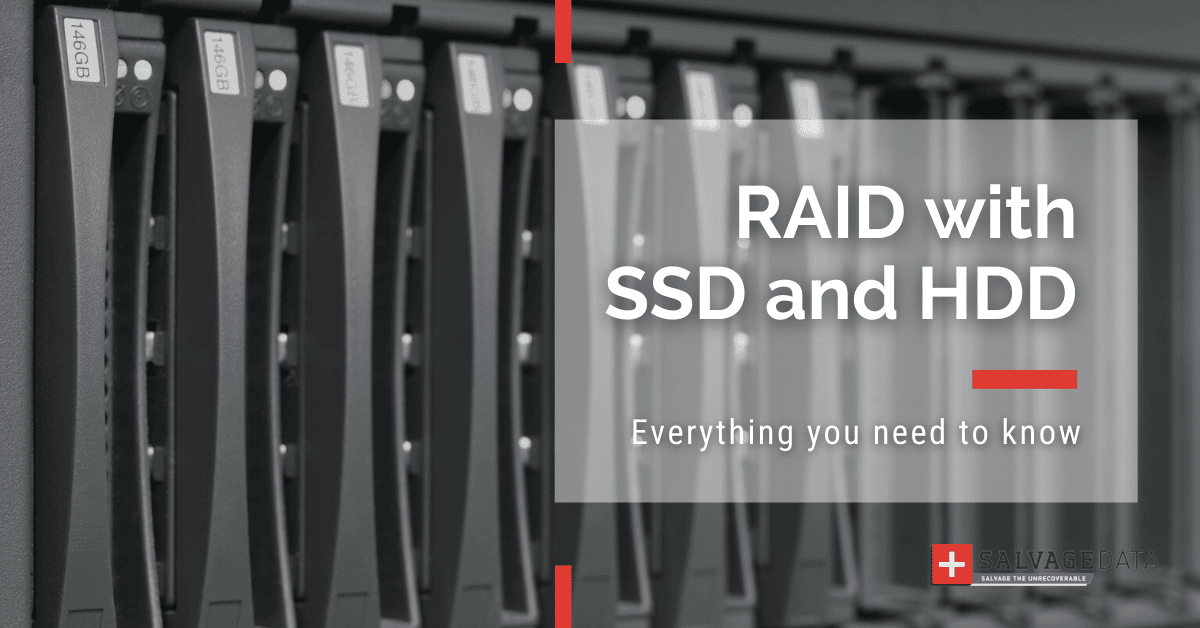 There are so many benefits from upgrading your data management setup for a RAID array, that you’ll first ask yourself why you haven’t done it sooner.

Then, your next question will most likely be:

How to do RAID with SSD and HDD combined?

This is a valid question, especially when it comes to costs.

An SSD provides superior performance. But even though there are great affordable SSD options nowadays, an HDD is still cheaper.

So, is getting the best of both worlds possible? The short answer is no.

Technically, you can set up your RAID drives configuration employing both SSD and HDD disks simultaneously.

But the real question here, instead of how to do RAID with SSD and HDD is: SHOULD you?

Let’s explore why you should not by getting some perspective on what RAID drives really are.

How Does RAID Drives Work

When a single hard drive disk is not enough to handle your data storage needs, whether for business or personal purposes, then setting up RAID drives will be your next step up within a budget.

Knowing the purpose of a RAID and how it works will help us understand why you shouldn’t mix RAID with SSD and HDD.

RAID system was created to improve reliability and performance by using multiple disks to handle data storage.  It’s definitely about not keeping all your eggs in one basket.

Although a RAID array is not a substitute for a backup, there are great benefits for combining two or more physical drives:

Basically, redundancy in RAID is about employing more drives to improve overall power.  And there are a couple of ways of achieving that according to how you configure multiple disks to work.

Here are the basic RAID configurations:

Spanning: it only writes data to the first physical drive until full capacity before writing on the next disk

Striping: it splits data apart equally between the drives

Mirroring: it keeps an identical copy of data in each disk

Parity: the calculated value used to restore data from one drive in case the other one fails

Each RAID configuration has its pros and cons, so it will depend on your data storage needs and volume to determine which will suit you best. And you can combine them with different setups known as RAID 0, RAID 1, RAID 5, RAID 6, and RAID 10 (or 0 + 1).

Why You Shouldn’t Do Raid with SSD and HDD

It all comes down to how technology is built on these data storage devices.

For HDDs, or Hard Disk Drive, data is written in a disk platter and it is accessed by a needle head that hovers above it.

Whereas for SSDs, or Solid State Drive, there are no moving parts whatsoever. Data is stored in a NAND flash memory.

Right off the bat, there’s a vulnerability issue here. HDDs are more fragile because of these moving parts. So, if there’s any physical damage to a mixed RAID, the HDD might compromise the integrity of the whole array.

Even though it’s possible to set up a RAID with SSD and HDD, the outcome will be an array performing only as fast as the slowest drive.

Mixing RAID with SSD and HDD will lower the bar if you consider any RAID configuration, whether striping, mirroring, or parity, simply because an HDD can do only so much.

If the fact of a RAID performance being actually leveled down to an HDD, instead of being uplifted by an SDD, is not enough to convince you, then there are other red flags.

Keep in mind the conflicting maintenance issue. HDD needs regular defrags and indexing in order to enhance its performance and wipe out any security issues. On the other hand, not only SSDs don’t need a defrag, a defrag will shorten their lifespan.

Besides, clean-ups for SSDs work using the built-in TRIM command – which cannot be prompted when you RAID them. 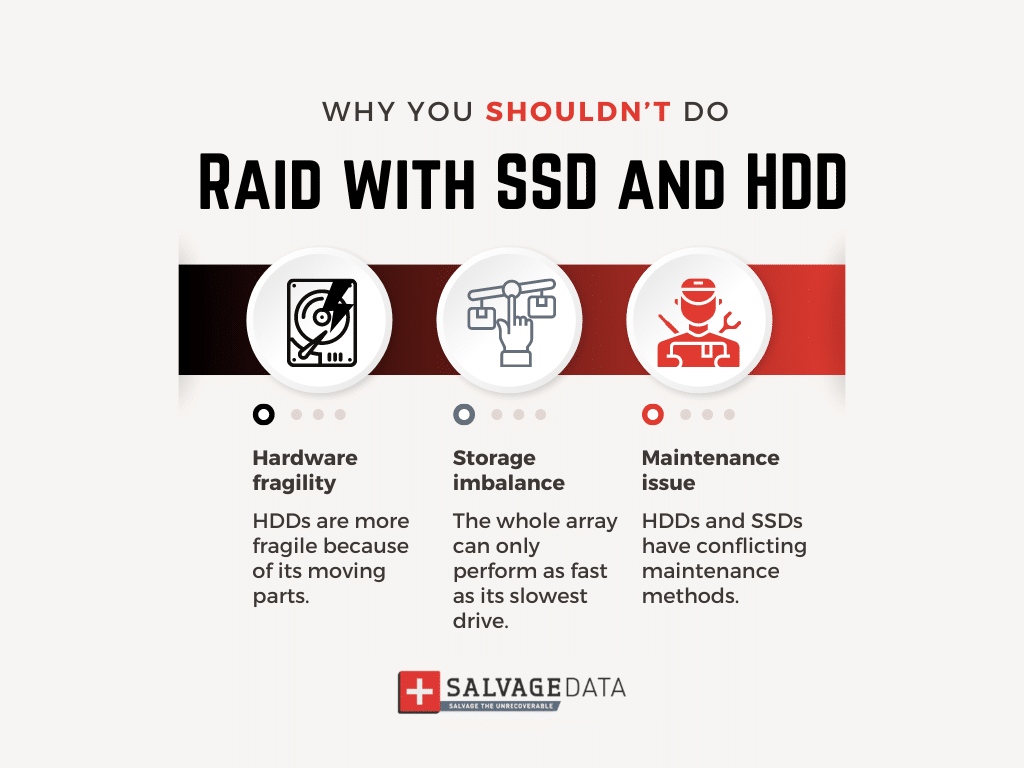 In sum, as mentioned before, SSDs already deliver superior performance. Then it doesn’t make sense to mix RAID with SSD and HDD if you’re looking for improved performance. The best scenario is to either set up an SSD alone OR a RAID with HDDs only.

In any case, data loss can never be dismissed. RAID Drives – combined or not – can be affected by physical damage, power surges, bad sectors, unintentional user errors, malware, etc.

If mixing RAID with SSD and HDD can cost you an underused device, the toll on data loss can be higher. Always back up your data and keep a disaster plan handy. In case of data recovery needs, SalvageData has over 18 years of experience with RAID systems, so don’t hesitate to request help.