How to Rebuild a Failed RAID without Losing Data 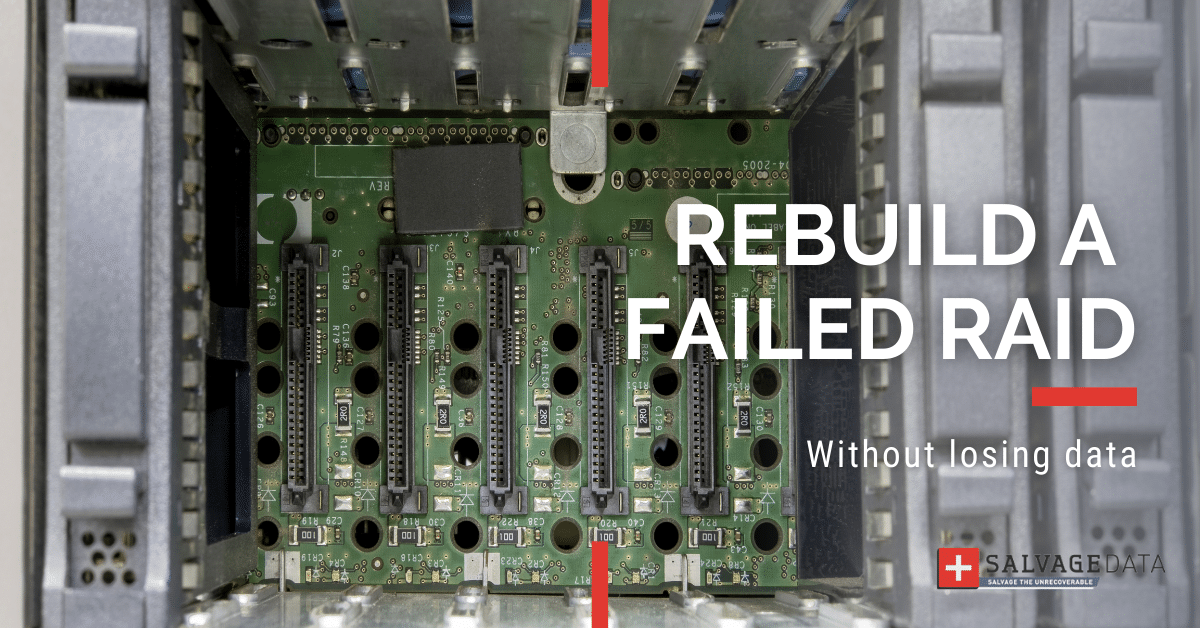 If you are in the unfortunate situation where your RAID array has failed or is running in a degraded RAID mode, most likely you’ll need to rebuild it.

A raid drive recovery may be complex and risky, but the steps below will guide you with the ways of properly rebuilding it.

The goal here is to initialize the disk without losing data.

Also, a few pointers on how each RAID configuration works are helpful for successful data recovery of RAID 0, RAID 1, RAID 5, RAID 6, and RAID 10 arrays.

Once you make out how a RAID hard drive works, you’ll find out under what circumstances you might need to rebuild a raid volume. Here’s the full guide to stop raid loss!

How to Rebuild your RAID

Rebuilding a RAID is necessary when one disk of the array stops working, even if it does so temporarily and everything seems to be functioning correctly.

When one hard drive goes offline, the workload put on others increases as they have to perform tasks instead of the defective one. Therefore, it’s only a matter of time that the still-working hard drives are going to suffer the same fate. If that happens, RAID repair and data recovery become more difficult (and almost impossible) to accomplish.

Even if immediate repair is needed, here are a few strong recommendations to follow throughout the process of RAID reconstruction without erasing data:

This guide should help you to rebuild a failed RAID array. Follow each step accordingly in order to avoid losing data:

Step 2. Connect it to the Controller

Disconnect the array member disks and connect them to the controller capable of working with separate disks (it can be either a non-RAID controller or a RAID-controller in single drive mode).

Launch a RAID Recovery Software and recover the array parameters.

If the RAID monitoring application and controller allow you to build the array without initializing the disk, then try to do so in this mode according to the parameters determined by the RAID Recovery Software. Be very cautious in case you are attempting this because if the array is rebuilt with the wrong disk order, the data will be lost.

In the case of a hardware RAID, you can write the array to the disk and then try to mount the disk in whatever operating system previously used. If you don’t have a disk that is large enough, then you can build a temporary array and write data on it. Anyway, never write any data to the member disks of the original array.

Once your information is saved and checked (always open at least several large files to be sure that data is recovered properly), rebuild the original RAID and copy data back.

Keep in mind that RAID rebuild time depends on two things: the quantity of data being calculated and the capacity of the array itself.  A smaller RAID array can be rebuilt in just a few hours, while more complex ones can take well over 24 hours.

Now that you know the steps for rebuilding a degraded raid in general terms, it’s important to consider recovery for each RAID array type (or level).

Each RAID configuration has its own set of redundancies — which means different fault tolerances. So, before you carry on with your RAID drive recovery, it will be helpful to get a little background information on those differences:

Based on a striping technique, also known as “stripe set”, RAID 0 uses two or more disks in order to improve server performance. However, failure of one hard drive disk in this configuration means the whole array being affected — which is why you won’t be able to rebuild it.

This configuration applies the disk mirroring technique where two or more disks mirror one another to prevent data loss. By copying data from one disk to another, it creates a mirror image of the information and a built-in copy of everything the user has done. During the initial mirror build, there is always a bit of lag in computer function — but the speed goes back to normal as soon as the procedure is accomplished. RAID 1 is used where system reliability is critical.

Such type employs both striping and parity techniques to improve performance and reduce information loss. With disks arranged in a RAID 5 (from 3 and up to 8 units), one hard drive can temporarily go offline and no data will be lost that way — which means that in the event of a corrupted, or otherwise damaged drive, RAID 5 will continue to operate in a degraded state. RAID 5 recovery is more complicated, but the information can still be recovered even if one of the disks has failed. This array is most often used in large companies and enterprises.

Very similar to RAID 5 but it utilizes two different parity functions. In spite of the fact, its recovery is very complex, RAID 6 is able to survive more than one hard drive failure.

This array is based on mirroring and striping techniques so that it inherits RAID 1 fault tolerance and RAID 0 speed efficiency. Such configuration is able to survive a single disk failure and, in some cases, get over multiple simultaneous hard drive failures as well. RAID 0+1 is one of the most expensive types because the capacity overhead increases with the number of disks.

Need help or have questions about your failed RAID?

SALVAGEDATA’s data recovery service experts have been accomplishing RAID recoveries for individuals, Top 500 companies, and federal institutions all across the USA. Don’t hesitate to contact our RAID recovery help service line at 800-972-DATA (3282) for immediate assistance — day or night!