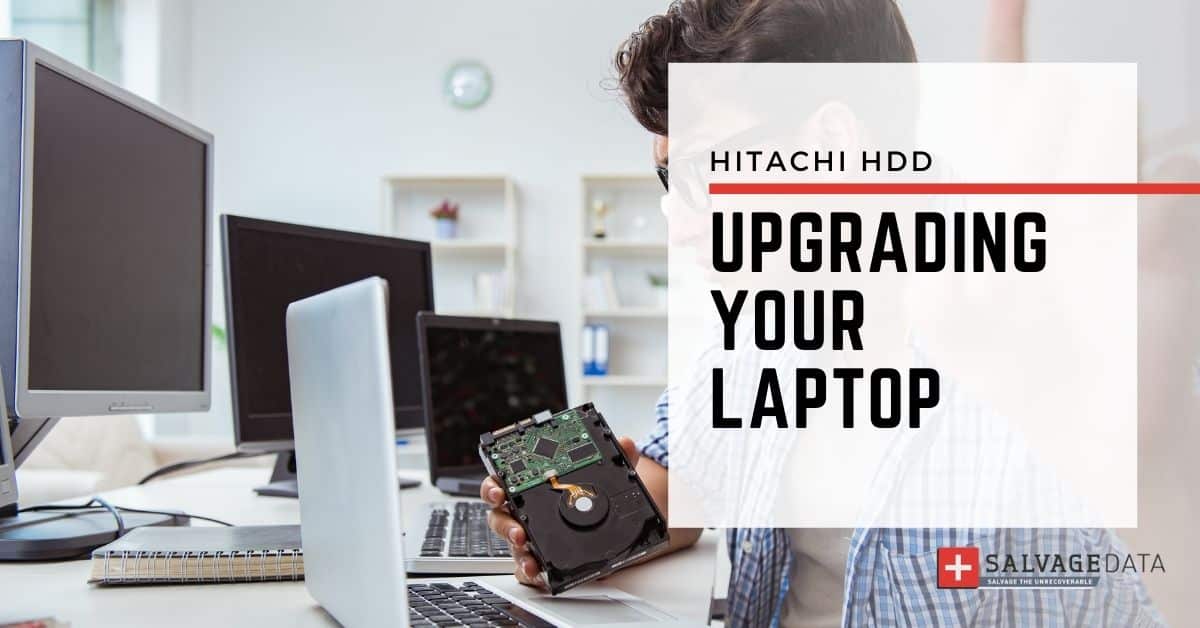 Not all laptops need to be upgraded with an SSD. The HDD (Hard Drive Disk) still holds its place in the market, even today. They are pretty cheap and offer more storage than your standard SDD (Solid State Drive).

The best thing about upgrading your laptop to an HDD is the price. It is much more affordable than purchasing an SSD (Solid State Drive) upgrade and it has more storage space for files like movies, music, photos, even games.

So, whether you’re looking for replacing a failed hard drive or upgrading your current one for one with higher capacity, a Hitachi’s HDD is a great option.

Among other HDD manufacturers, like Western Digital and Seagate, Hitachi HDD is considered the most consistently reliable.

HDDs vs SSDs: Which one is better?

We have compared these two storage solutions before and the truth is that hard drives are still relevant and useful.

SSDs have much more storage capacity than HDDs to start with – the Exadrive from Nimbus, for instance, holds the world record for the biggest SSD with 100TB capacity. But you have to keep in mind that SSDs have a finite number of write/read cycles.

Whereas an HDD can be erased and overwritten as many times as needed. So a Hitachi 1TB HDD should be more than enough for personal use.

When it comes to endurance though, SSDs are much more resistant than HDDs since there are no moving parts. However, if you’re careful with it, you’ll have a functional Hitachi HDD for many years.

How to Upgrade Your Laptop with a Hitachi HDD

Installation of the Hitachi HDD is also quite simple. All you would have to do is unscrew some screws on the bottom of your laptop to get to the HDD bay.

The screwdrivers and other Hitachi HDD tools are included in the package at the store you purchase your hard drive from.

Make sure if you do decide to upgrade with an HDD, that it is exactly identical in size to the one you have now.

There are different sizes for laptops and all of them are not compatible with each other make or model. You would need an exact replacement made by the same manufacturer for this to work properly.

For example, I have a Dell Inspiron 14R which has a Hitachi HDD 5k500 b-500 (a 500GB Hitachi HDD) installed out of the factory. If I were looking into purchasing another one, I may consider buying a Hitachi HDD 5k750-750, which is 750GB, so I know it will be compatible.

Is a Hitachi HDD upgrade enough?

As we’ve said before, a Hitachi HDD 1TB or 2TB can hold plenty of data. When considering a Hitachi HDD reliability as well, whichever storage capacity, you’ll have nothing to worry about.

But you can also expand your storage space with a Hitachi HDD by purchasing a portable hard drive or USB flash drive which offers even more room for your files!

The next time someone asks you if they should swap out their HDD in their laptop for an SDD, let them know that if they are looking into purchasing something that will hold them over for now then the Hitachi HDD upgrade would be perfect!

However, if they are looking to get speed and speed alone then maybe look into upgrading with an SSHD or SSD.

A Hitachi HDD upgrade is very simple and affordable for anyone wishing to enhance their laptop’s performance.

As a final note, remember that you cannot recycle the old hard disk but you can take any other components out of it if needed, such as putting in a new HDD, card reader, fan, etc. We definitely encourage you to reuse the components wherever possible rather than just throwing them away.

And if you are replacing a failed hard drive, keep in mind that SalvageData can easily recover the data from Hitachi HDD drivers. Request a free evaluation anytime!